Black Bear Hunting in Alberta: Q&A to Get You Started 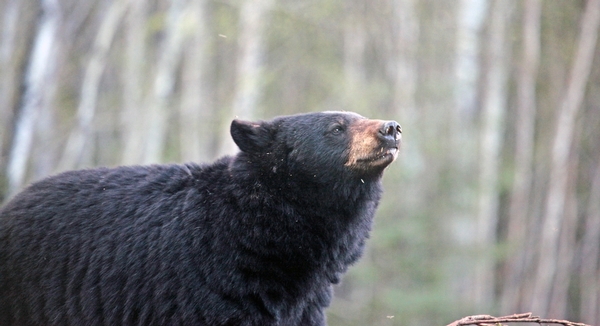 Black bears are one of the most widespread big game species in Alberta, occurring on 75 percent of our landscape. The latest studies approximate 40,000 bears roam our province—equal to an average density of 84 bears per 1,000 km². Some areas in the northeast having as many as 370 bears per 1,000 km²! In many zones, hunters can purchase a black bear licence, as well as a supplementary black bear licence to be used in the spring and or fall seasons.

Who can hunt black bears?

Anyone eligible to hold a valid hunting licence in Alberta can purchase a black bear licence.

Where can I find black bears?

Bears live in many different habitats. You’ll find stable populations in the boreal forest, foothills, mountains, and a good portion of the parkland. Hunters have a significant area of Green Zone, or Crown land, to hunt where bears are abundant. Just remember permission is always required to hunt on private property.

What are black bears?

Black bears are omnivores, listed as a big game species in the Alberta Guide to Hunting Regulations. They are the smallest of three bear species native to North America. Unlike it's larger and more infamous cousin, the black bear doesn’t have a distinctive shoulder hump. Looking at their shoulders is an easy way to differentiate black bears from grizzlies.

Many people expect the black bear to be…black. The truth is they can range in colour from black to white!

When can I hunt black bears?

Alberta offers a spring season for black bear that starts in April and runs through June. Some Wildlife Management Units in the southern portions of the province have shorter seasons. There are also fall black bear seasons—an opportunity to harvest a bear while hunting other big game.

Why should I consider hunting black bears?

Besides being an all-around excellent recreational hunting opportunity, black bears are a great source of protein and the fat on a fall black bear can be rendered into lard and used for baking. Bear fat has also been used historically for waterproofing footwear and leather mittens, and, as with deer and other big game, hides can be tanned and used for garments, throw rugs or crafts.

How do I hunt them?

Hunting black bears is not for everyone, but if you’re up for a truly challenging hunt, try spot and stalk. Read more in our article, Spot and Stalk Black Bears.