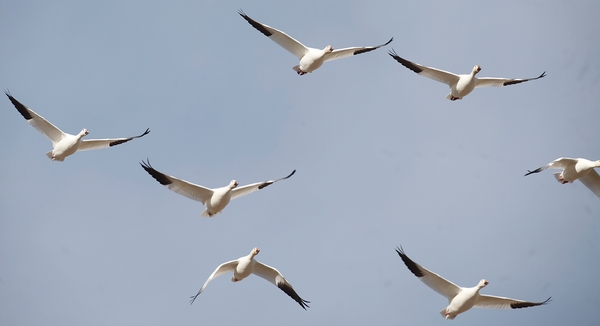 Spring snow goose season opens March 15th each year—an early spring opportunity for hunters with cabin fever after a long winter. The good news is the season opens early, but the reality is most birds show up closer to or in April.

Snow geese migrate north as soon as they sense the weather allows it. Some years, snow geese reach southern Alberta in late-March, but years with a late spring will delay migration.

They tend to stage for short periods as they leapfrog north to their arctic nesting grounds. They are anxious to return to the tundra to initiate nests, which means they bounce through agricultural areas quickly in the spring.

The parkland region of Alberta can hold snow geese for longer periods of time, as snow geese have limited food sources after they leave the last agricultural fields in central Alberta. Many populations of white geese will not see cereal grains, field legumes, or green shoots until the snow melts on the tundra. The last stronghold of the high-protein feed means hunters have an advantage—white geese will stay in staging areas for several weeks at a time.

Focus on pleasant weather and open water. Once birds arrive, they seldom return south, even if a spring blast of snow hits the region. The white geese stay focused on returning north, no matter what Mother Nature throws at them.

Snow geese are very habitual and often use the same staging water they did the previous fall. If you saw whites last year, that’s your starting point for this spring. When you find staging areas, follow birds to fields they feed in (with landowner permission of course!).

Most counties and municipalities in Alberta have land ownership maps on their websites. It is easy to download the maps on a tablet and take them with you when spotting. Several hunting apps also provide a landowner map overlay.

It’s simple, but a gamechanger. Lines of geese on the horizon are difficult to properly identify without magnification. White geese plus cloudy skies—you’ll be thankful for the upper hand with good optics.

Several web pages and social media groups track the snow goose migration. Staying engaged can keep you on the leading edge of migration. You’ll know exactly when to be out spotting for a spring hunt.