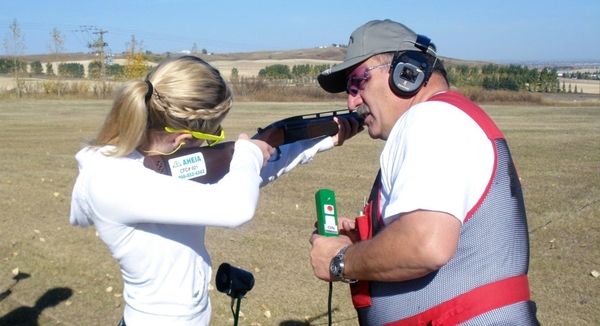 The goal is not to hear that word. When youths learn to shoot a shotgun, they’re at important crossroads in their development as a hunter. Too much gun or high-velocity rounds that punch a little too hard, or even knock them down, can induce fear and pain. Bottom line: make a mistake at this stage and your young shooter might quit.

When introducing shotguns to younger shooters, we can avoid those experiences by understanding two common problems: a high level of felt recoil and improper fit.

The fundamentals of firearm safety are everything. Until that is understood, no one, child or adult, should start shooting. Young shooters must fully comprehend the potential danger of guns. Ask yourself if your youngster is mature enough to take on this huge responsibility. Deciding to teach the basics and safety of proper shooting and handling of firearms also requires the utmost confidence in your own skills.

If you’re a seasoned shooter, it can be easy to forget just how uncomfortable recoil can be. Keep in mind that shotgun shooting for adults is different than for youths—

Experienced shooters often strive for a textbook perfect stance, but this isn’t always the best choice for youngsters. They might need to step the forward leg farther ahead for improved balance. On the other hand, like adults, youths must learn to mount their shotgun consistently. This means bringing the butt of the gun squarely to their shoulder and up to their face. It’s not unusual to see inexperienced shooters tilt their head to put their face on the comb to help them sight down the barrel. This needs to be corrected. It’s a recipe for a bruised face, flinching, and potential fear of their gun. Watch carefully that the shotgun comes up to the cheek instead of the cheek going down to the shotgun. Their heads should be straight and erect when shooting.

Shotshell selection can also have a significant influence on recoil. In the learning phase, when youths are shooting clays, stick with light loads. In a 20-gauge, 2 ¾” 7/8-ounce loads of #8 shot are a good choice; for 12-gauges, look to a 2 ¾” 1-ounce load of #8s or similar.

Make it habit for your shooter to hold the shotgun firmly—we don’t want that stock to bounce up and hit their faces. Bruising happens if they aren’t pulling the gun firmly into their shoulders. In fact, youngsters should practice shouldering the gun and pulling it in. This motion must become familiar for success.

A 20-gauge shotgun is the best choice when getting started in wingshooting. They are typically built on a smaller, more manageable frame than a 12, shells are widely available and affordable, and recoil with light loads is tolerable for youngsters.

Many of us started with a 12-gauge, but it’s not the best choice, as they tend to be heavy and difficult to handle, and the significant recoil can discourage those smaller in stature.

There was a time when the tiny .410 was touted as the starter shotgun of a choice, but it was a mistake. While the mild recoil is a plus, the small shot charges make it nearly impossible for an inexperienced shooter to hit a target in flight, ultimately discouraging them. For wingshooting, the .410 is more of an expert’s gun than a beginner’s.

Awkward, oversized, or heavy guns are difficult to swing smoothly. As a teacher, address this by first finding the right length-of-pull (the distance from the trigger to the centre of the gun butt). Consider cutting the stock down if necessary, adding length as the shooter grows. Of course, many companies already make youth models trimmed down to size; some come with spacers allowing you to lengthen the stock as your youngster grows.

Finding the right shotgun isn’t always easy. Do your homework and use your best judgment. The right gun is out there.

In fact, time is what it takes for your young shooter to build up strength and an understanding of the shotgun’s shooting mechanics. Practice shouldering, shooting, and getting back on target. Practice tracking a clay. Dry-fire practice. Whatever practice they’re up for—be patient and do it as much as they’re willing!