harvestyourown.ca
''Because it brings family together not just in the bushes but at the dinner table. It's always been a family activity and makes it something I look forward to every year.'' - Mary H.

In the pale morning light, a few silhouettes appeared against the eastern sky. The birds were headed in our direction, but fighting a brisk west wind. As they neared the fence line of our field, the distinct cackle of speckle-bellied geese let us know that these arctic birds were the first off the roost.

The flight of 12 birds slowly approached as they fought to move into the wind. Instead of circling our decoy spread, they played the wind currents and floated back and forth as they made their approach and checked things over. The birds finally committed to landing, dropped their orange feet, and back peddled hard to lose elevation in the wind. We emerged from our blinds and took down half the flock with well-placed patterns of steel shot. The shooting was fast, as the birds quickly flew out of range by opening their wings and allowing the wind to whisk them off. 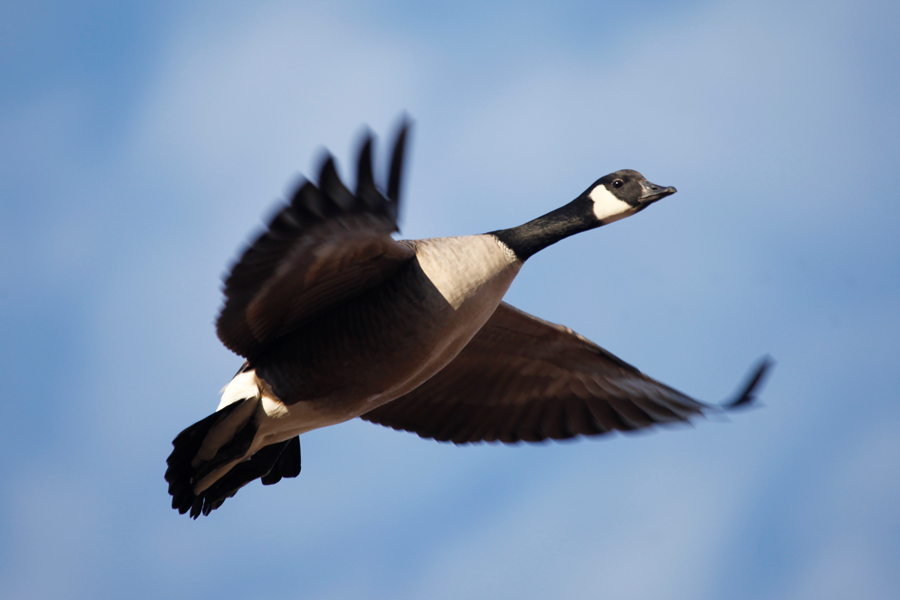 We spotted the field the night before and watched hundreds of specks flood into the harvested peas, along with a mob of snow geese, and equal numbers of Canada geese. Knowing that the specks were in the group of feeding geese, we set up specifically for them to decoy to our blinds. When we watched the birds land in the field, it was easy to tell which ones were speckle-bellies without even using our binoculars. They never sit in the main body of geese on the ground and tend to break off in smaller family groups that land in front, or on the edges of the flock. Taking a cue from the birds, we used three dozen specklebelly decoys set out in groups of four to eight. We spread the groups out 25 to 50 metres in front of the main decoy spread of Canada and snow geese. When the birds came in to feed that morning, they did exactly what they had shown us the night before and tried to land behind the main group, on the downwind side.

The next couple of flights that came to the field were also specks, and they decoyed well. The strong wind helped us immensely and kept the birds from circling or hovering over the spread to eyeball every detail on the ground. Having the full-bodied speck decoys and speck shells made the spread look extremely realistic.

To be a successful goose hunter hoping to take a mixed bag of geese, you need to start thinking like the birds. That is, know the behavior, social, and feeding routines of Canada, speckle-bellied, snow, and Ross’s geese to allow you to set up in a way that appeals to all the birds. Then, target an area where their migration overlaps.

We had found the perfect mixed-bag hunt, and, with thousands of birds using the same stretch of pea field, and we hoped to take a full assortment of geese. To do so, we had to pay careful attention to the set-up and where to lay out the variety of decoys we had brought. We set our blinds with the wind at our backs and hid them in a dense group of Canada decoys. The shells were spread out in a wide flock that was set more in a straight line than a “V” or horseshoe pattern.

One of the biggest mistakes most goose hunters make is laying out a tight horseshoe that doesn’t leave enough room for the birds to land. The average Canada goose has a wing span of close to two metres. If there are ten birds in a flock trying to land in your spread, you need at least 20 metres of room in the centre of your horseshoe. If there isn’t enough room, the birds normally bounce off to one side and never present a shot opportunity. Setting up in a long, cigar-shaped pattern will always plenty of room for even the big flights of 20 or 30 birds. They will usually decoy to the center of the spread, allowing you to place your blinds correctly, near the middle and under the flight line. 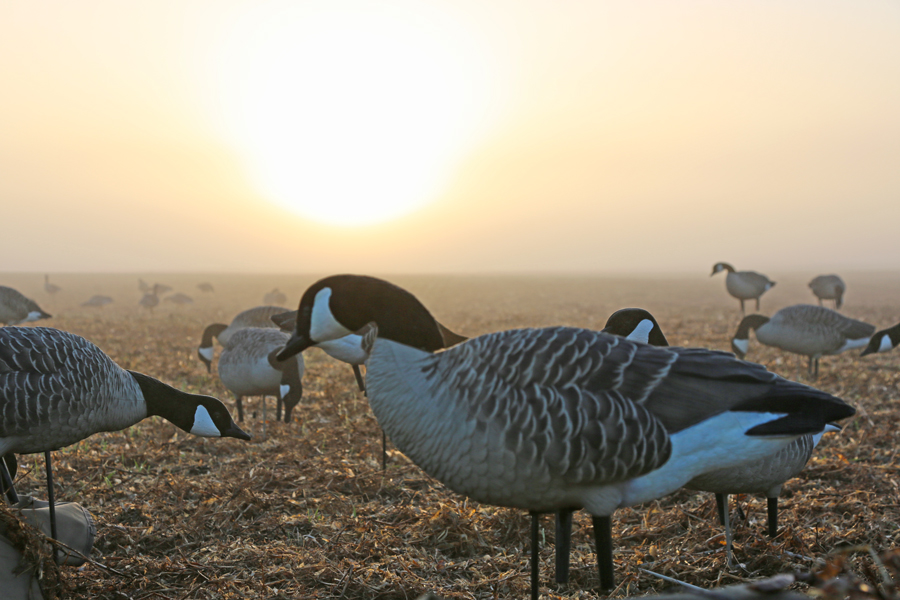 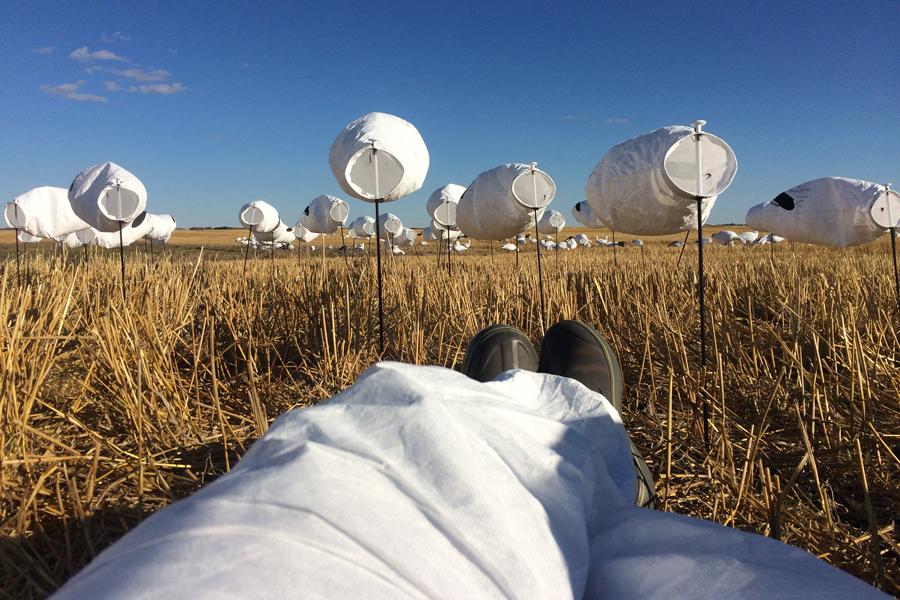 With the speck decoys further downwind, we set up to maximize our opportunities for these keen-eyed birds. The next test was on the honkers winging their way towards us. The Canadas didn’t waiver like the specks but made a beeline directly towards our blinds instead. We had shot the specks at 25 metres in front of us, but the honkers were going to be much closer. I could hear the wind grinding in the bird’s wing feathers as they came directly to us. The geese were so close that we could see their eyes scanning the ground at the foot of our blinds for a place to land. The close encounter was exhilarating and had my heart pounding fast and furious in anticipation of sitting up and trying to shoot straight at close range, where my shotgun pattern would be tight and dense.

When I barked the command to “take them” to my two hunting partners, we unleashed a barrage of steel to put some of the dark geese in our daily bag. We had set the Canada decoys correctly and had some of the closest gunning a waterfowler could ever enjoy. It made it easy for all three of us to take multiple birds before they winged out of range.

We knew there were thousands of snow geese also using the field and I had brought my full bodies and several hundred snow goose rags. We placed the full body snow decoys directly upwind of the Canada spread where we were well concealed in our blinds. Knowing that snow geese decoy much differently than the grey geese they were sharing the field with, we hoped to draw them into range by setting up the snows directly behind us.

If you are an avid snow goose hunter, you already know that the white geese are very different than their grey cousins. They normally feed in large, tight groups, and often number in the thousands. They like the safety in numbers concept and pack tightly to avoid predators by limiting their exposure to an individual. Because white geese feed in such dense groups, they tend to eat everything in their path. Specks and Canadas land on the downwind edge of a group already in a field but snow geese always land on the upwind edge of a group. It only makes sense, as the thousands of birds already on the ground have already cleaned up all the groceries in their path and to get something to eat you want to be in front of the mob.

We knew we couldn’t set up on the upwind side of our snows, as it would allow all the dark geese to land downwind of the large decoy spread, and out of range. What we tried to do was set up our snows directly upwind of the Canada spread to allow us to shoot the whites as they passed directly over top of our blinds, on their way to the front edge of the white decoys we had placed.

Because snow and Ross’ geese can be weary, carefully scanning all the details of the decoys and ground below them, we set the full-bodied decoys on the downwind edge of the white spread, as they’d be the first white bodies that incoming birds would see. The detail and realistic characteristics are imperative to making the incoming birds confident that their friends on the ground are real.

We used the rag decoys to create lines of birds that lead to the main mob of decoys, which was a perfect imitation of what we had seen the real birds do the night before. The strong wind would help us control the exact flight path of the incoming birds with the main group of snow decoys directly upwind of our blinds.

The theory was soon to be put to the test when a flock of about 40 snows squawked their way across the field towards us. They did bounce around, like the specks had done, which is typical for most arctic geese, before muscling up and setting their wings to land. The entire flock soared directly over our heads at less than 20 yards, providing the perfect range for open shotgun patterns. We emptied our shotguns and had to make a quick run from the blinds to pick up the downed birds spread across our decoys. I wanted to keep the decoy spread very specific to keep birds from falling off to the sides when coming in for a landing and collecting the different colored birds was important to keep them segregated so that they didn’t alter the flight patterns of incoming birds. 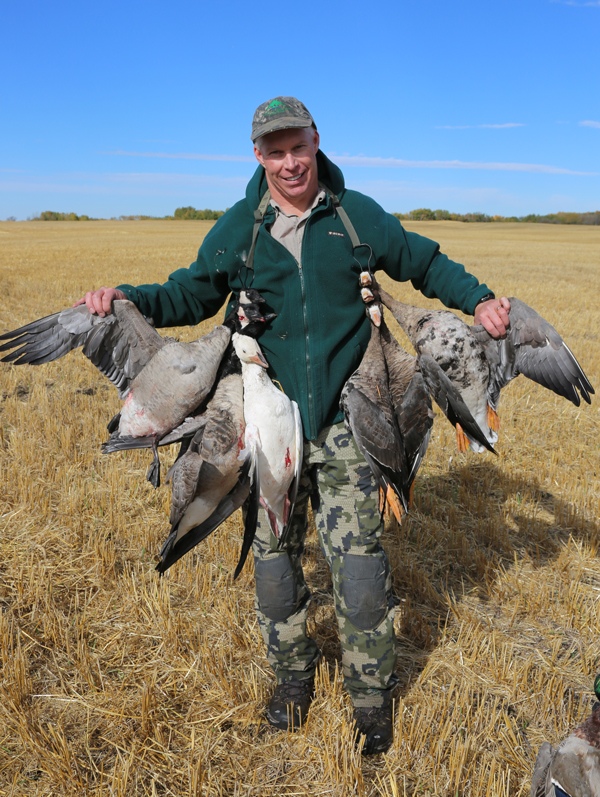 The next hour was sheer mayhem. We had mixed flocks of geese work us close and were able to fill our limits of specks and honkers. With the incredible number of birds in the sky, we targeted adult specks with the bold bars that stand out on their breast. With extremely high limits of snow geese, we didn’t expect to fill our daily bag, and we were more than satisfied with the opportunities we were getting.

Knowing the specific feeding habits and behaviours of the different geese is critical to maximizing your success on any shoot. I’ve learned a lot simply by watching geese coming into a field when spotting. Watching where birds land in relation to the others on the ground has allowed me to fine tune my presentation to replicate exactly what the birds do naturally. With the incredible diversity of geese that grace our skies in western Canada, there is always a good opportunity for a mixed-bag hunt. Don’t let the specks and snows frustrate you and simply look for another hunt; take advantage of the monster shoots and simply think like a goose.

If you’re a true meat hunter looking to fill your freezer, learn how to get more hunting opportunities in Alberta when you pursue anterless big game.

Cleaning and Storing Your Shotgun

Learn how to clean each part of your shotgun and store it properly. Care for your shotgun so it lasts a lifetime!

Storing your gun may seem simple enough, but making sure you firearms are secure keeps your home safe, legal, and ensures that you have a functioning gun to use to next hunting season.

A self-taught Alberta hunter teaches his son how to hunt.