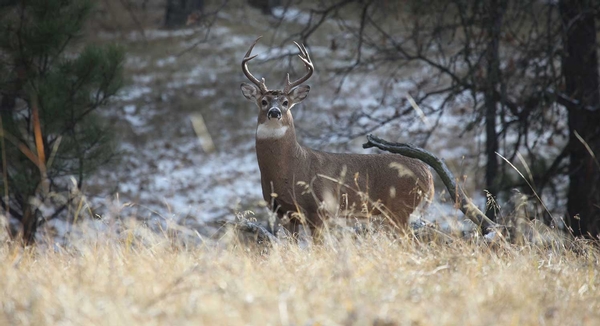 Don’t we all have a tendency to believe what we’re told, especially when it’s from someone we trust? Let’s debunk some widely-held myths about hunting white-tailed deer that get passed from hunter to hunter.

While it’s true bucks react to hunting pressure, they don’t sleep all day to escape hunters. Bucks may not frequent agricultural fields in daylight once the season’s first few shots ring out, but they’re still actively pursuing does. Simply their midday courting grounds are now within the protective cover of the trees.

Myth: You can tell a buck print from a doe print by the presence of dew claws.

All deer have dew claws. When the ground is soft, muddy or snow-covered, dew claws will leave an impression whether the deer is a buck or a doe.

That’s not to say that examining tracks can’t provide meaningful clues. Is the deer alone or with others? A buck is more likely to be alone. Most importantly, look at stride length—a mature buck has a significantly longer stride than a doe.

Research shows that bucks of all ages rub on both large and small trees.

Remember that it’s not his antlers a buck intends to rub on tress, but rather the forehead, between the eyes and the antler base. Small glands allow them to leave scent, a signal to other bucks in the area.

Myth: You’ll scare deer away if you urinate near your stand.

Obviously don’t get caught in the act, but studies reveal your “scent” doesn’t alarm deer. In fact, the opposite may be true.

It’s been documented that deer might be attracted to the odour of urine left by any number of creatures. Leave the pee bottle at home!

Myth: Hunting over scrapes is the best way to find a big buck during the rut.

The truth is that bucks make and visit scrapes much more often before and after the peak of rut than they do during prime time. When the majority of does are ready to breed, dominant bucks are too busy tending them or moving on to the next ready doe to spend time checking scrapes.

The pre- and post-rut period is when bucks are more vigilant in checking and freshening scrapes. Read How to Hunt the Deer Rut for more on that.

Myth: The timing of the rut is determined by moon phase.

Nope—it’s the number of daylight hours in any given 24-hour period that triggers the rut.

Deer have evolved so that when they give birth, fawns have the greatest chance for survival. This means that when a fawn drops, the availability of food and cover, and the prevailing weather, must be most favourable.

Myth:  If it’s windy, you may as well stay in camp.

Many believe deer in strong winds are less able to detect predators, so they bed down in thick cover and wait it out.

Howling winds do render a deer’s senses less keen, but they don’t quit going about their business. Deer know their territory like we know our house—when the weather turns nasty they know exactly where to head for maximum protection.

Windy days can be your friend, narrowing your search radius. The wind in your face ensures your scent won’t betray you while muffling your noises.