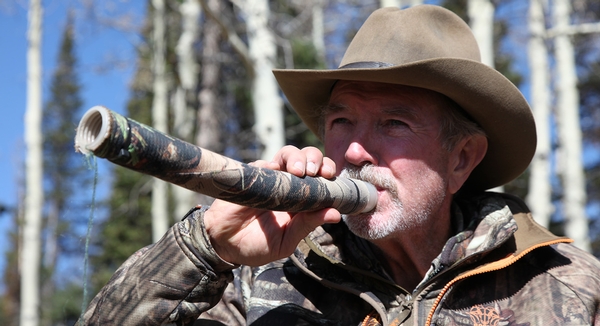 I first met Wayne Carlton about 25 years ago when he came to Canada to put on an elk-calling seminar. Little was known about calling elk and there were few options for manufactured calls. Wayne revolutionized elk hunting and calling with the introduction of his diaphragm calls and bugles. His passion for hunting elk led him on a mission to develop a call any hunter could use to duplicate the natural sounds of cow, calf, and bull elk.

I had the opportunity to hunt with Wayne and found I still had much to learn. I’ve taken over 20 elk since I enjoyed my first seminar with him and we shared a hunting camp full of seasoned hunters. The first morning out was indicative that everyone can continue to learn if they want to.

Wayne is an old-fashioned story teller and seems to have an endless array of epic tales. I asked him when the best time was to call and he laughed and responded, “anytime you’re hunting.” He regaled us with a story of his biggest bull taken on a mid-day break after scouring the mountains to no avail. Wayne and his hunting companion had stopped on a open hillside to rest their mules and have lunch. While unwrapping his sandwich, Wayne started a calling sequence and before they were done eating a big bull came screaming in on them. The action was fast and furious and was proof that calling can work anywhere and anytime. 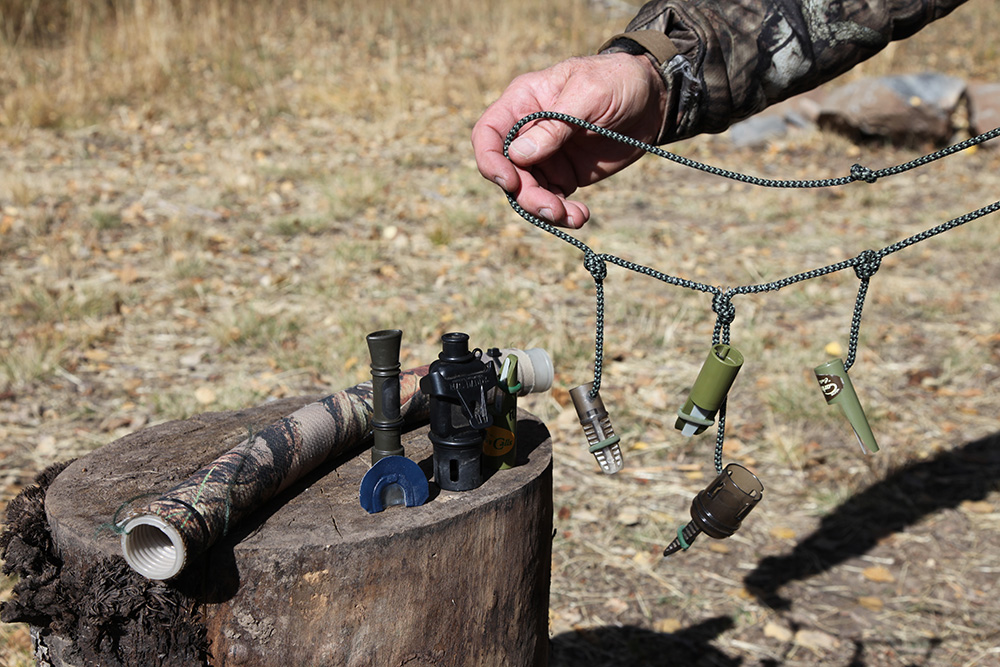 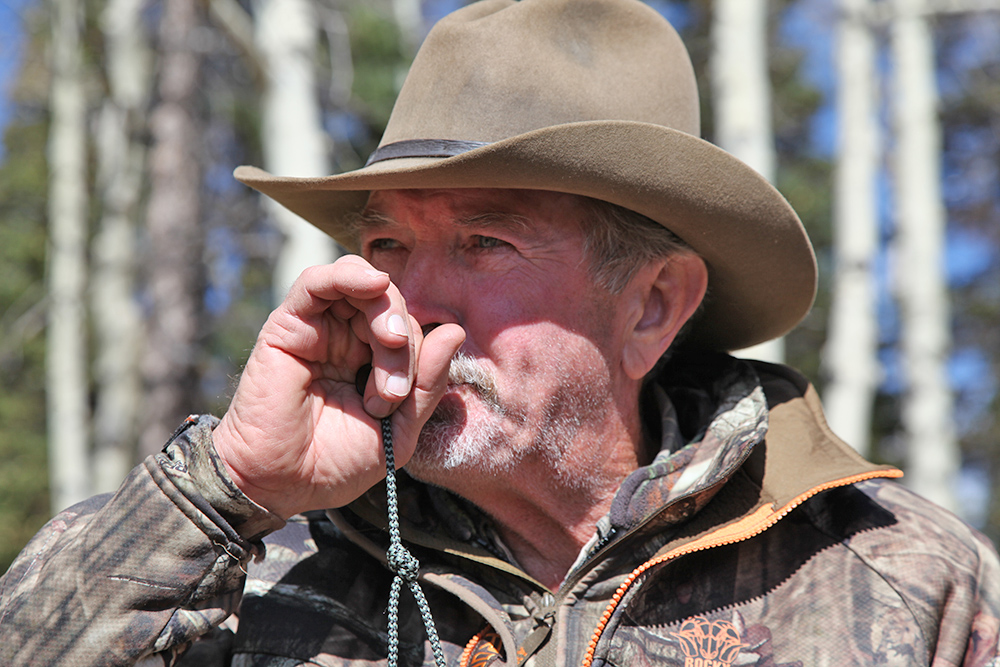 I sat by the campfire at night and picked Wayne’s brain about the specifics of calling elk. One of his biggest recommendations was to go to elk country and listen to them. Our National Parks are wonderful places to listen and observe elk and how they interact.

Elk make a significant amount of noise going through the bush. Even a content herd feeding in an open meadow is full of chirps and mews to break the silence. The social nature of these creatures allows us to call in diverse ways.

Make your calls sound appealing. That is, if you are trying to locate elk bedded up for the day call like a cow trying to find her herd. The call should be long and pleading in nature. If you’re trying to attract a bull during the rut, provide the pitch and tone to produce the hormonal-charged excitement that can get a bull going.

I’ve had lots of elk hunters tell me they always use a cow call for hunting bull elk, while others say nothing works better than a bugle. The best advice is to use them both. I did notice Wayne using his bugle to locate bulls whenever we started hunting. Bugles are great for locating bulls in your hunting area but should also be used if you aren’t generating the response you want from a cow call. The bottom line is bugles work in many ways, and there is never a bad time to try one.

Reed calls are easier to use than diaphragm calls and require a lot less practice. Clench the call at the tip of the reed between your teeth and use the pressure from biting down to change the pitch of the call when blowing into it. Start on a high note with firm pressure and slowly release with your teeth to make the mewing or chirping sound.

For novice hunters not wanting to learn the techniques required for a diaphragm or reed call, the squeeze calls are a great option. A rubber bulb on the call is compressed with your thumb to produce sound. Start with slow pressure and increase to change the tone. I like to use the squeeze calls in conjunction with a mouth call to sound like several elk talking at the same time.

The original bugles were all based on using a diaphragm. Carlton’s Mac Daddy bugle was simplified so anyone can use it, and while there is still a diaphragm in the call, it is built into the mouth piece so the user simply has to blow into the call to stream air over the latex membrane to produce noise. Instead of having the diaphragm in your mouth and using the pressure of your tongue to change the tone, a pressure tab is used on the mouthpiece, so the call does all the work internally to produce the different octaves of a bugling bull. Simply blow into the bugle and slowly compress the tab to produce higher notes. It doesn’t get any easier, and if you growl with your throat while using the call, you can add the raspy sounds of an old bull.  Using your diaphragm to push air into the bugle mouth piece will produce the chuckling sound of a bull after he calls.

There is no need to take a seminar to become proficient, as most calls are purchased with an instructional video so you can sit in front of your television or computer and have a one-on-one seminar with Wayne in the comforts of your own home. He makes calling look easy and is a master at quickly showing and teaching people how to use his calls with his DVDs and online videos. 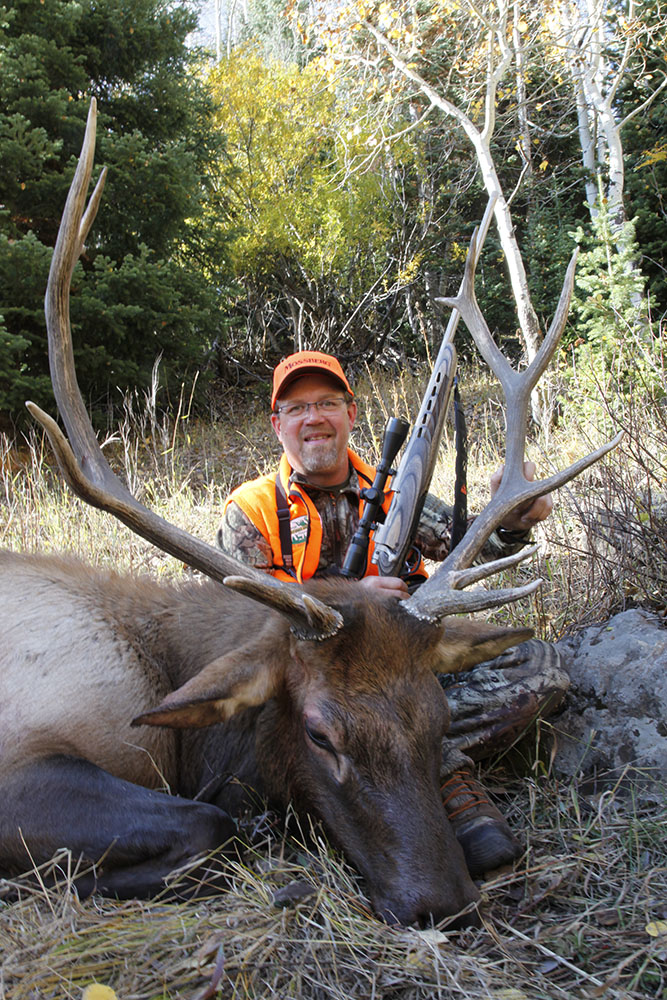 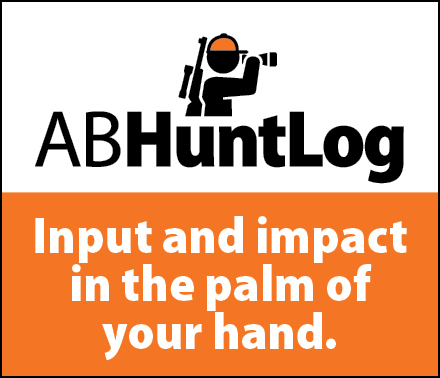